But together with some people I had another idea - make the app icon fully transparent, this should resolve the issue. May be this should be not Shortcut Creator main icon, but icon from ShortcutExecutors for example, but these are details and main idea looked good.

I worked on these recently and can say that this idea does not work. The main reason - it is not possible to make the icon fully transparent.

Actually the only existing way is to setup your app API target lower that Android 8 (SDK 26)  and doesn't use adaptive icons. In this case the system doesn't create adaptive icon for you. But currently you could not upload your app on Google Play Store if your target API level bellow 26 😒 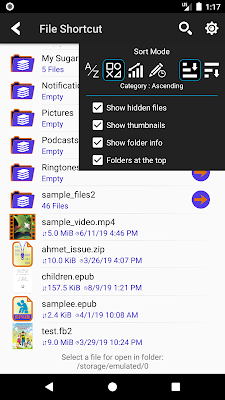 After a long delay I finished series of some features and improvements in the app.
These changes are included: improvements in internal file browser, new "composite folders" feature, support of static app shortcuts and ability to use mode switcher for start-up some app together with changes in available settings.

Improvements in internal file browser There are changes in representation of file items in the app and in folder shortcut internal viewer.
Now you can see the size and last modification date for files and some extra info about folders.
Also you can change the sort mode, show/hide hidden files and view thumbnails of some files:


Currently the app tries to extract thumbnails for files in common image formats (jpg, png, bmp, gif, webm), video formats (avi, 3gp, mp4, webm, mkv, mov) and some documents/books formats (pdf, epub, fb2). Now while creating shortcuts on a file the app can allow you to use image from the file for all of these formats, later only image fi… 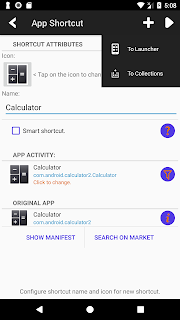 There is new 3.0.0 update witch includes big feature with the name "Collections".
Actually this is a special database in which you can organize your shortcuts. For obtain quick access to the saved shortcuts the users can create special dialogs which represent different sets from the database.
Appearance of these dialogs (together with internal file browser) is now controlled by new layout system which can be configured by the user.
Since Google+ will be closed soon all links to the community have been changed to new Facebook group.
"Collections" database.  Now while shortcut creation you can select add the new shortcut to the Launcher (on the main screen) or to Collections. The Launcher direction is the same flow for creating and add shortcuts on the main screen. As always you can find the new created shortcut in History list and then add this shortcut to Collections from History.